Who was on the plane? How close did it come to the colliery? Who took the photographs of the crash scene that were circulated in the Associated Press? 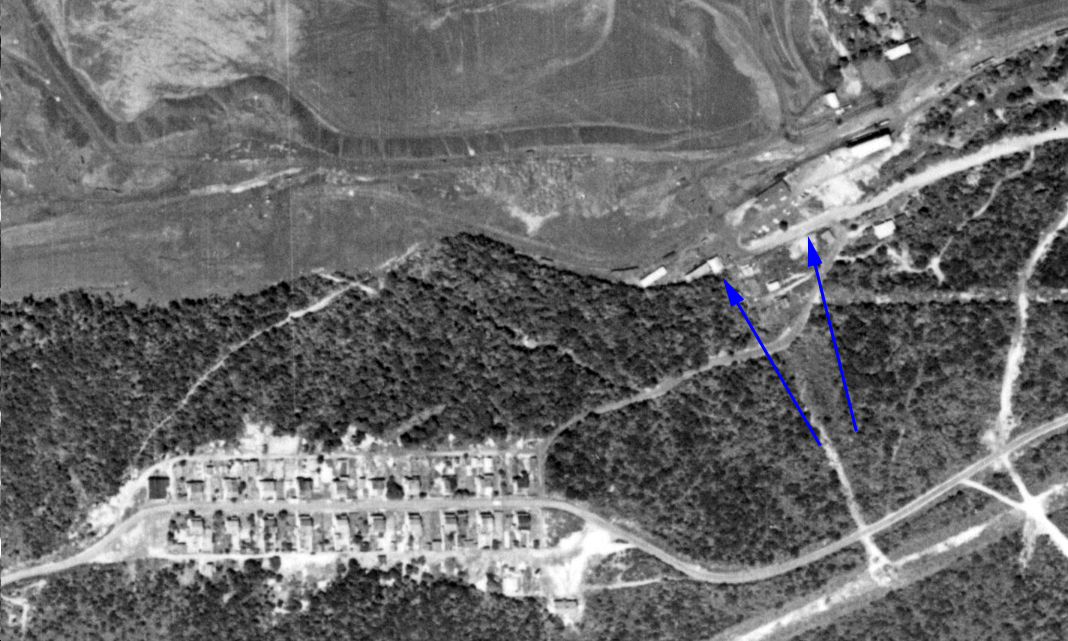 The interest in our page’s coverage of the United Airline’s 1948 crash in the coal patch town of Wilburton, Pennsylvania has been overwhelming. Many of you had lots of questions, therefore I’ve tried to answer many of them in this post and there are a number of articles for you to look through. I hope you find it informative.

United Airlines Flight 624 from San Diego to New York filled with actors, media, and other well-known people crashed by clipping a portion of the Mid-Valley Coal Colliery in the coal-mining village of Wilburton in Columbia County, Pennsylvania killing all 43 people aboard—39 passengers and 4 crew members on June 17, 1948. Who was on the plane? How close did it come to the colliery and how did local residents process the scene? Who took the photos of the crash scene and how did they make the photos arrive in record time to the Associated Press?

First, who was on the plane?

The DC-6 included Hollywood theatrical producer Earl Caroll, Venita Varden Oakie, the ex-wife of the Hollywood actor Jack Oakie, Beryl Wallace, an actress in Earl Carroll’s theater, and Henry L. Jackson, the co-founder of Esquire Magazine amongst others. From the Associated Press (AP), June 18, 1948, the following is a complete list of those aboard the airliner on its last stop in Chicago on its way to New York: 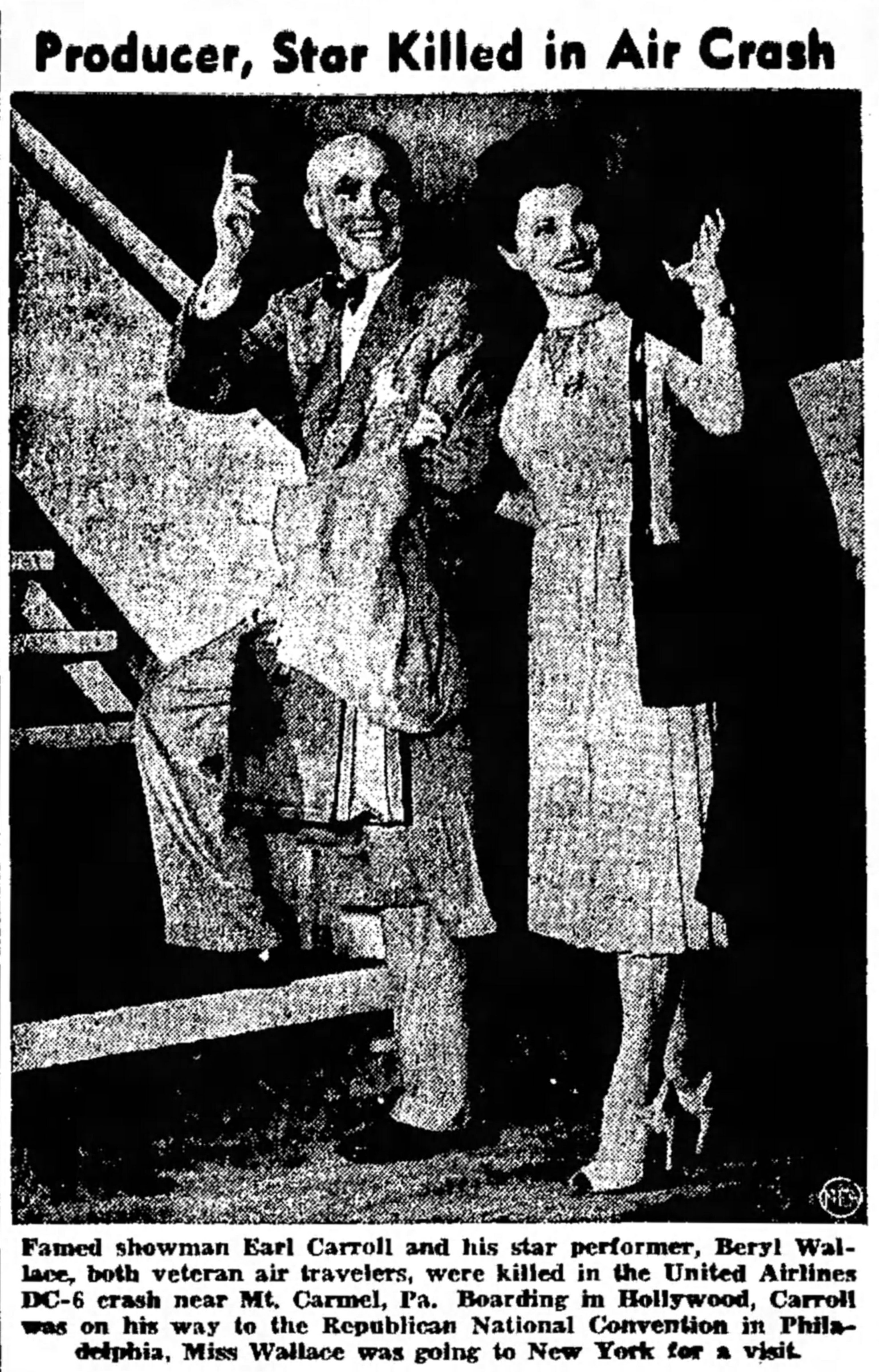 Producer Earl Caroll and his performer Beryl Wallace, both killed in the crash 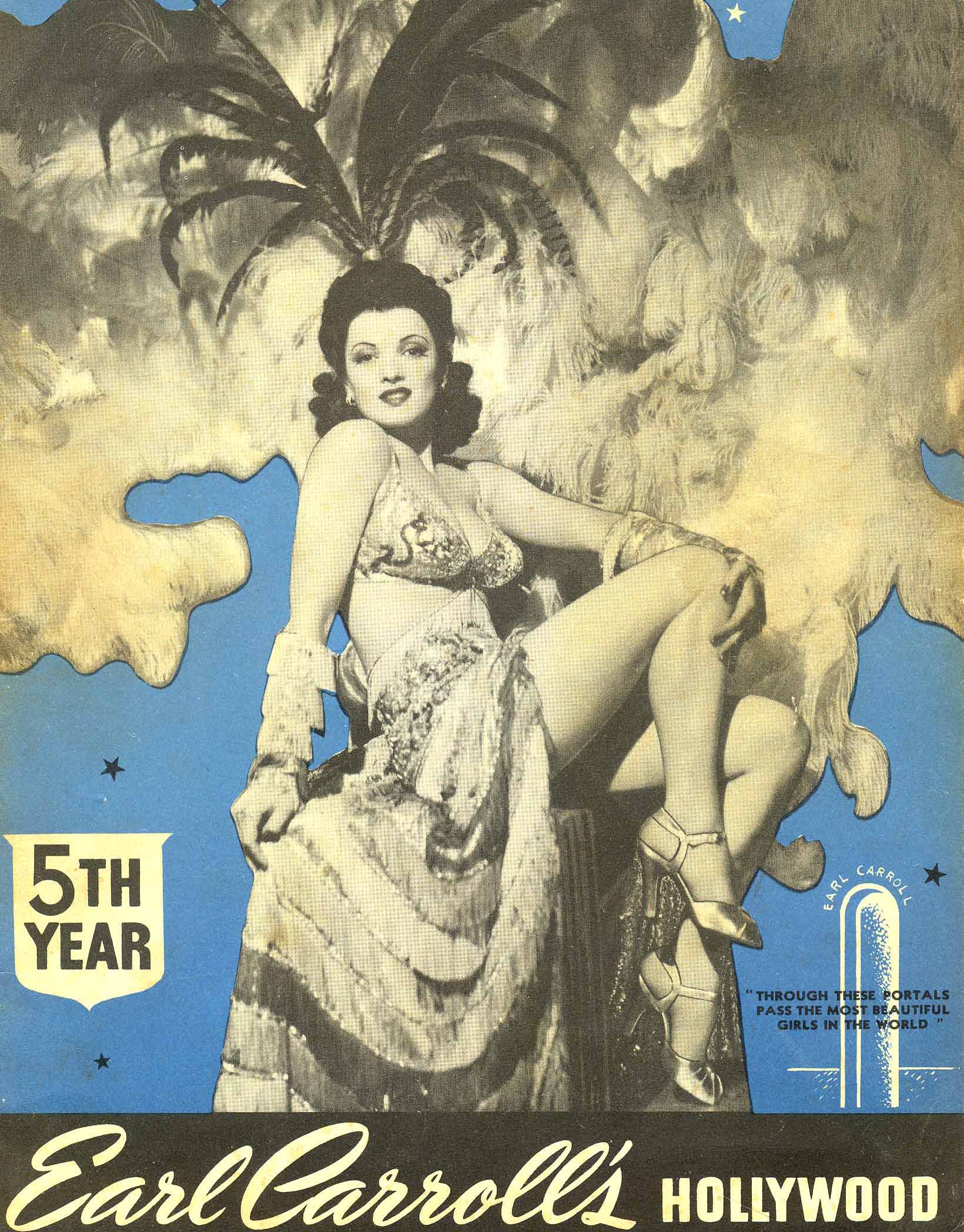 1940s program from Earl Caroll’s theater with Beryl Wallace on the cover, both killed in the crash.

How close did the airplane come to the colliery and how did local residents process the scene?

According to accounts in the AP, there were 80 colliery workers “who came close to death when the stricken plane barely missed crashing into a 265-foot high colliery in which they were working.” Again, the AP tells us that the plane tried to “pancake safely on a black hill of coal dust and water near this eastern Pennsylvania anthracite coal town.” The plane “limped at half-speed into a valley dotted with anthracite collieries.” The captain “guided his ship four miles between two hills. He was scarcely 30 feet above ground.” “Stunned miners saw the nose of the plane veer upward too late. It shattered against a 60,000 volt power line and exploded.”

How did they find the bodies?

A resident of Centralia explains that none of the bodies were intact. The scene was roped off and miners from the colliery that was almost hit by the falling plane helped the searchers “comb the areas for body fragments.” All of the bodies were taken to Joseph Stutz Funeral Home, Centralia. 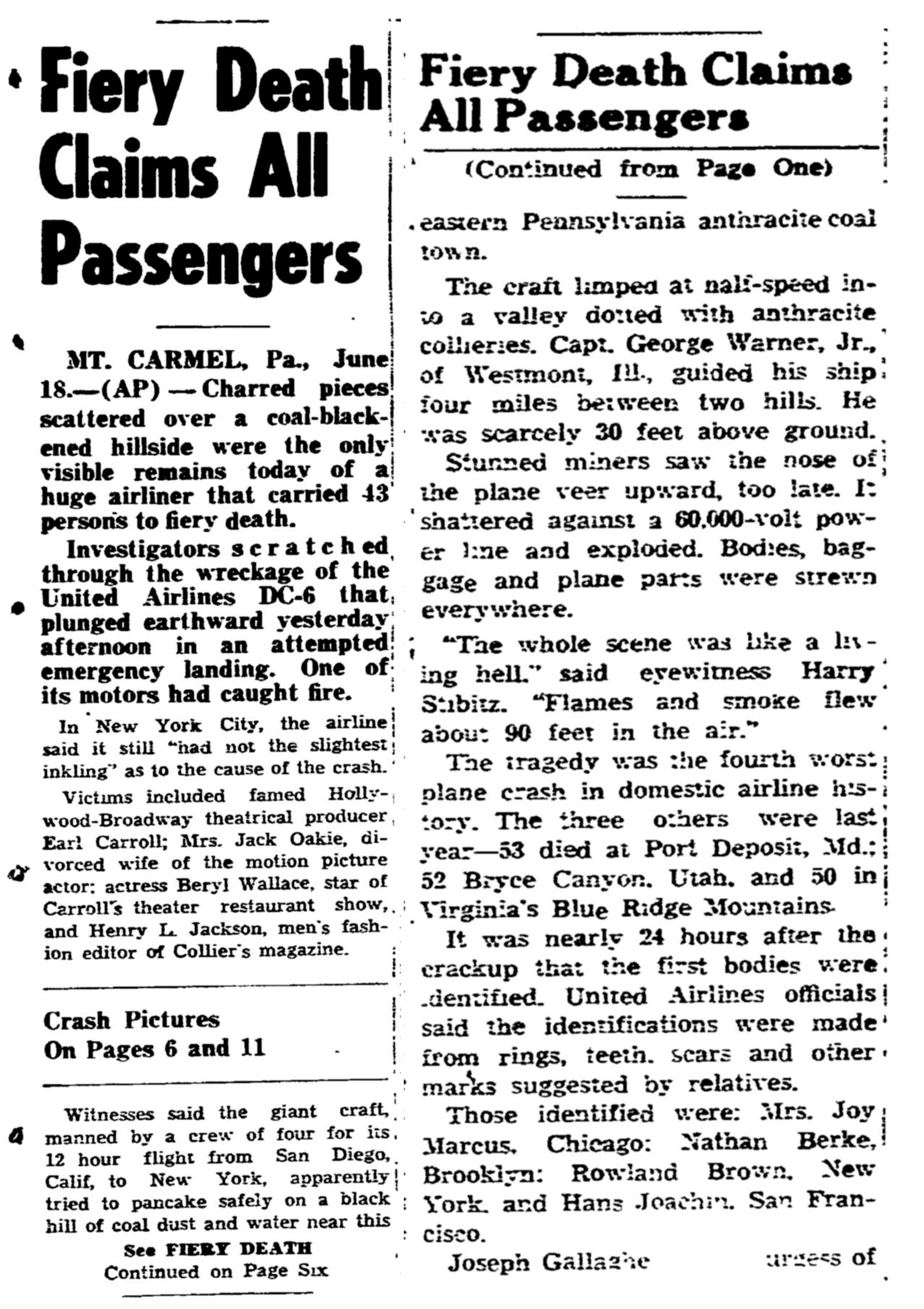 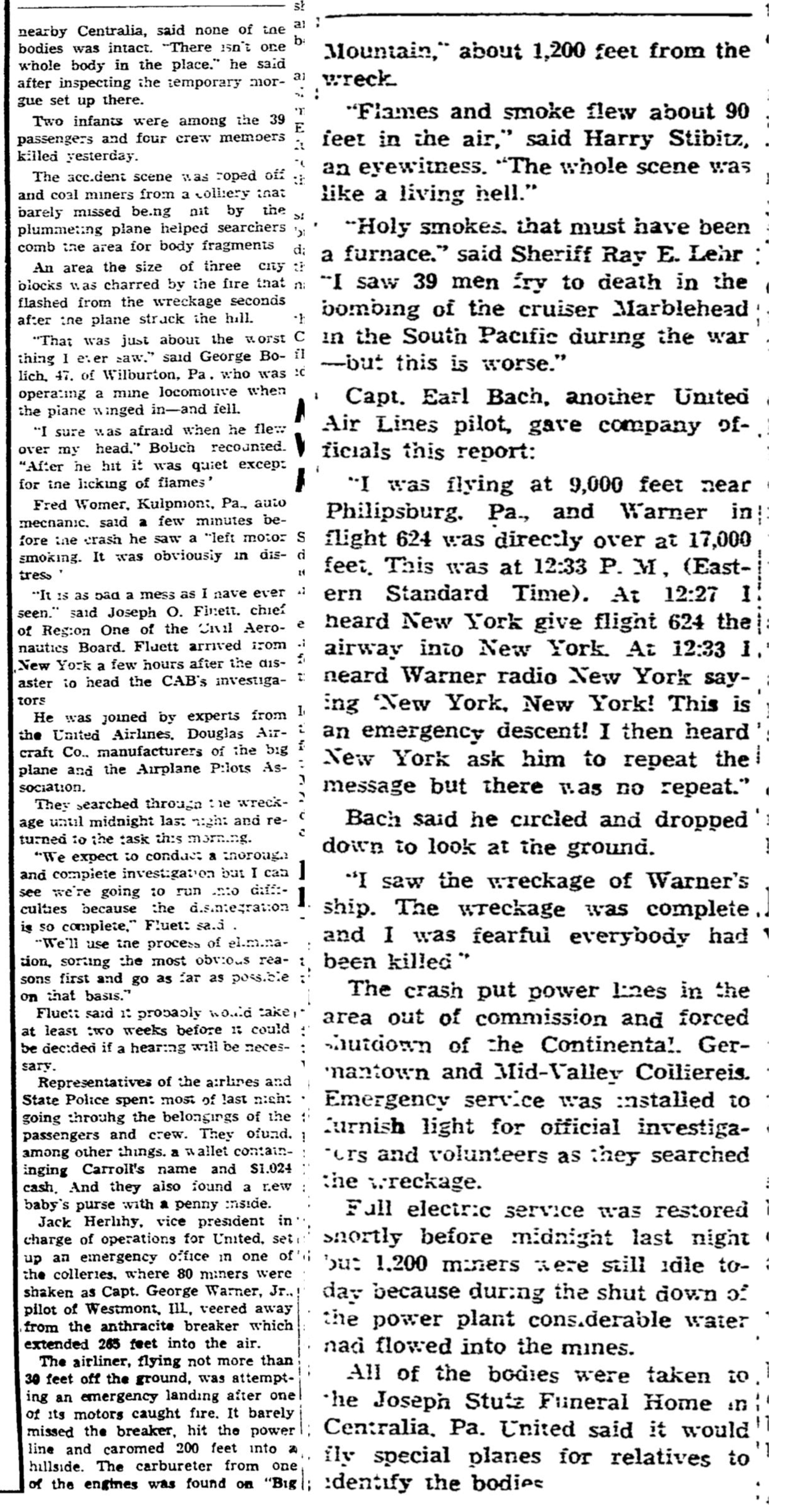 Who took the photos of the crash? How did local, anthracite region journalism play a big part in national journalism?

The United 624 crash was a pivotal moment for local anthracite region newspaper coverage. Thanks to a network of news contacts, Hazleton PA’s Standard-Sentinel/Plain Speaker learned of the crash within minutes. Editor Bill Kraft sent photographer/reporter Bill Morgan out with his camera. Although few local papers were a part of the Associated Press Wirephoto services because it was cost prohibitive, the Hazleton paper had made the decision to join. Despite the travel distances involved to the crash site, (a 45-minute drive), the need to develop the film, and the time required to make enlargements to send out over the Associated Press Wirephoto network, photos were shared by 3:15 pm, less than three hours after the crash. These photographs were an immediate contribution to national journalism allowing people to quickly see for themselves the destruction in their local newspapers. 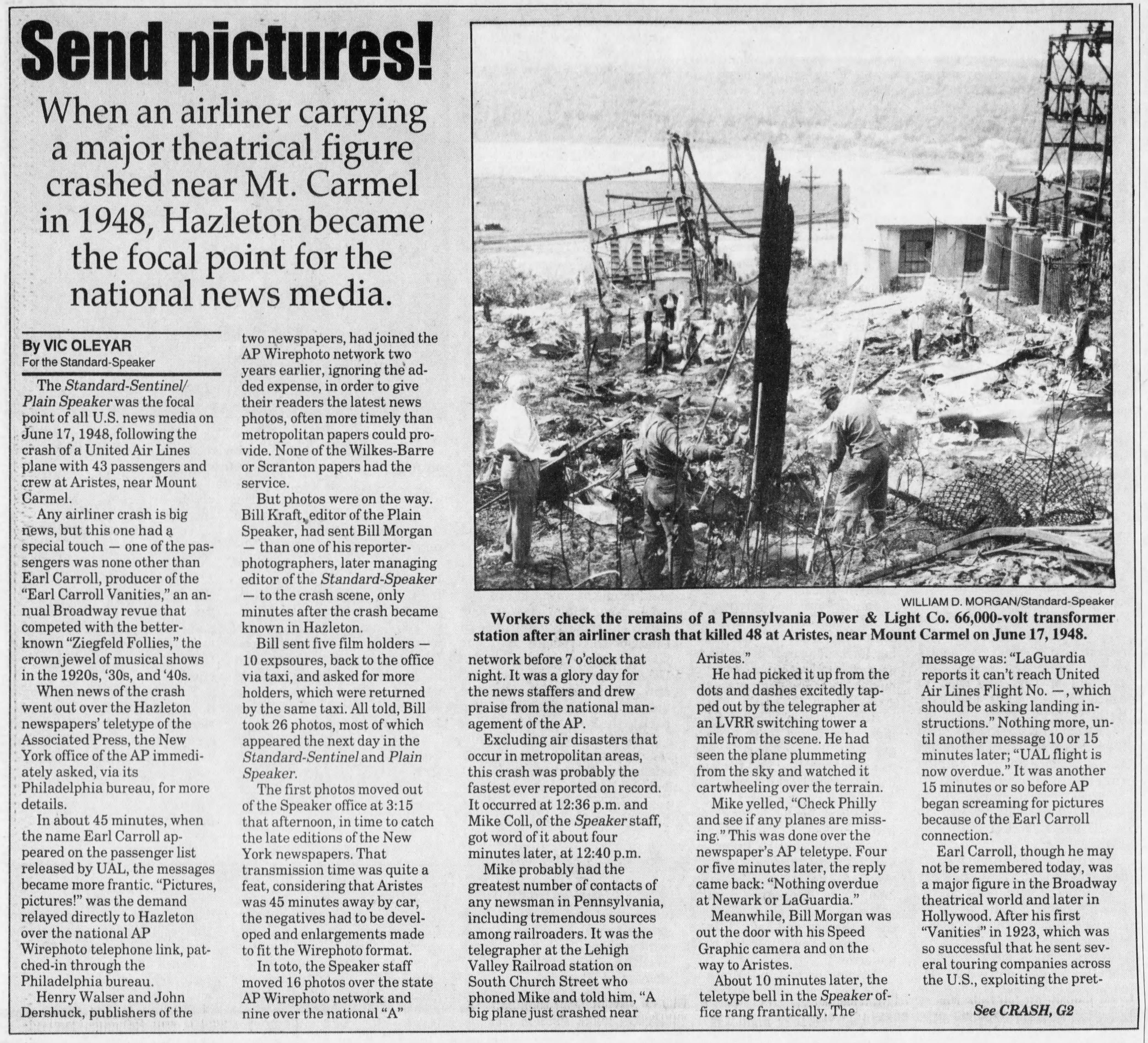 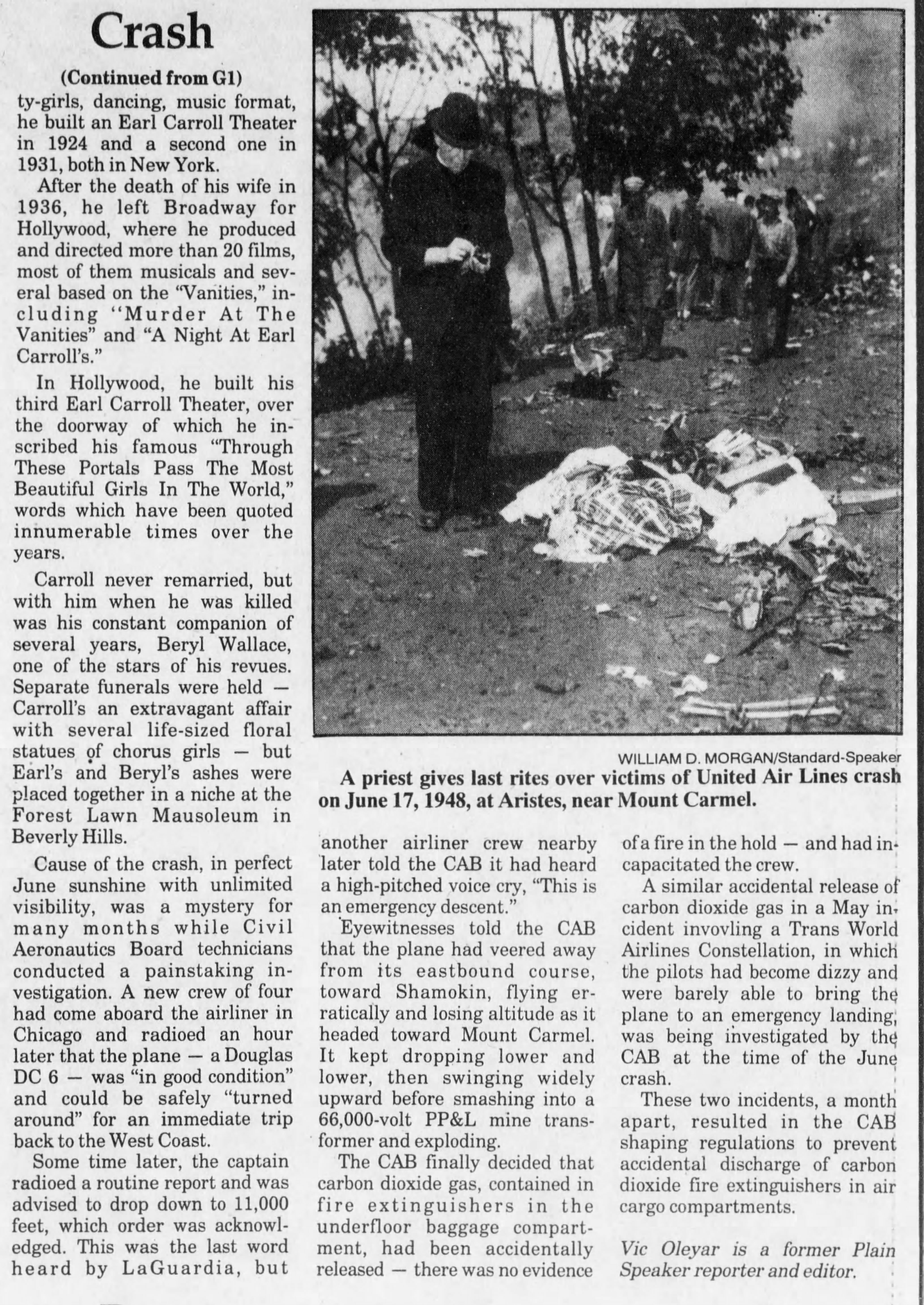